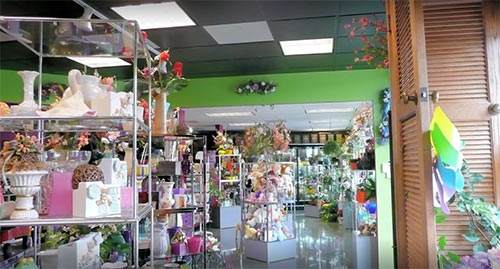 Stay tuned for some exciting new product lines this year! You’ve probably also noticed that we launched a new website design. You can now pay with Paypal or all major credit cards.

Our new website is not just a new pretty face. It has some major upgrades that will make your online experience easier & also customized. The new inbloom website is now “responsive”, meaning it will adjust automatically based on the device you’re using, whether desktop, tablet, or smart phone.

Another great feature is the smart recommendation list to provide you with suggestions on how you can make your gift even more special. It is a great feature that will allow you to pick a special upgraded vase, or larger size bouquet that goes with that unique flower arrangement, and suggest other items that complement your gift like Chocolates and Teddy Bears.

The new search engine will allow you to easily search for an arrangement by flower type or color of the flower. If your favorite flower is gerbera daisies, you can type the word Gerbera in the search box on the top menu.

If while you are searching for a gift for someone else, you find something great you would love to get, you can either add it to your favorites or better yet, send someone a hint directly from the page that displays the product. This feature will improve over time but we wanted to make it available to you as soon as possible.

The cart has been upgraded too. It’s easier to use and it will allow you to store your multiple delivery addresses so you don’t have to type it in each time.

There are other great features to discover on your own and more will be added over time. But as with everything we do, this was all done for you, so please let us know what you think. If there is something that isn’t working quite right (as sometimes happens with a new website!), please let us know.

We've served well over half a million nationwide customers since our start, being early on the web (1993) and looking forward to many, many more.

Login to check your balance or redeem rewards

Go from Couch Potato to Casanova

How to Put the "Man" Back in RO-MAN-CE

According to a Survey of Women: No Need to Be Prince Charming

The question of how to woo women has haunted men since the dawn of time.  But now the answer is clear, thanks to recent research. Do women want to be  romanced by Prince Charming? Surprisingly, the answer is no.

As a Professional Flower Delivery person with thousands of deliveries made in my career, I can tell you that on significant dates like Birthdays and Anniversaries, often the woman is expecting them, almost tapping her foot awaiting their arrival, but when they aren't expecting it, that's when they gasp and everyone in the office wows over what a man she has.  (Not saying don't send Birthday/Anniversary flowers!)

Always a Chance for Romance
A recent nationwide survey of women conducted by International  Communications Research offers new hope for the nation's legion of couch  potatoes: 80 percent of women say they could be romanced by a man who is  less than perfect.

While no man is a flawless Casanova, romance is not entirely foreign to  men. In fact, 91% - exactly the same percentage as women - feel romance is  important in a relationship.

What Women Want
What makes women happy? According to the survey, when it comes to romance,  actions speak louder than words. When asked how they would like the men in  their lives to add romance to their relationships, the top answer women gave  was for him to send her flowers unexpectedly (41 percent). Other popular  romantic gestures included cooking dinner for two, writing her a love song  or poem and watching a romantic movie together. A small percent said they  would even like to be fed grapes.

The results below offer trends on women and romance. Percentages tally  the top answers provided by women, unless otherwise noted. The independent  survey of 1,000 women and men was conducted in April 2000 by International  Communications Research for the Society of American Florists.

Q. How important is romance to a relationship?

The same percentage of men and women agree that romance is important to a  relationship.

Q. Could you be  romanced by a man who is less than perfect?

80 percent of women surveyed agreed that they could be romanced by a man  who is less than perfect.

Q. What would you like your significant other to  do to add romance to your life?

When it comes to romance, women would like the men in their lives to:

Q. Do you agree  that flowers continue to be a universal sign of romance?

Q. Which is or would be your favorite time to  receive flowers?